Who Am I? Part 1: Inspector Javert’s Suicide and Identity in Conflict.

Posted on February 12, 2013 by Gary Harper, The Joy of Conflict Resolution

A recurring theme in Les Miserables is the far from rhetorical question “who am I?” The protagonist, Jean Valjean, is thrice confronted by that question and his decisions define him as heroic. His nemesis, Inspector Javert, 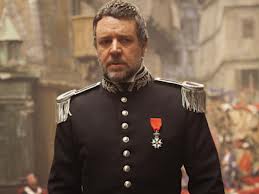 however, is unable to come to grips with  this same question and ends his life as a result. [Question: is it necessary to give a spoiler alert when referring to a novel written in 1862, made into a movie as early as 1935? :)]

At a pivotal point in the story, Valjean shows mercy to his enemy, Javert. Javert is unable to reconcile this act of forgiveness with his longstanding view of Valjean as a villain (“must I now begin to doubt who never doubted all these years?”). Rather than viewing Valjean’s action as an opportunity for reconciliation (or at least reflection), Javert denies that he has anything in common with his arch-enemy (“There is nothing on earth that we share. It is either Valjean or Javert.”) Racked by this inconsistency and stripped of his identity as the righteous hero (“I am the law and the law is not mocked.”), he plunges into despair (figuratively) and to his death (literally). (“The world I have known is lost in shadow . . . there is no way to go on.”)

In a less dramatic fashion, this theme recurs in many long-standing conflicts. Over time, the precipitating incident or issue is superseded by a sense of identity as a long-suffering victim (or, as in Javert’s case, a righteous hero). Subconsciously, a person in conflict may begin to define themselves through their role in the conflict. In other words, they become their story, and if the story was to change, they would be left asking “without this conflict, who am I?” Like Javert, their identity is dependent on viewing the other person as the villain.

ve witnessed this in people with vendettas against a bureaucracy. They can be seen with hand-painted signs proclaiming conspiracy and detailing the wrongs they have suffered. This is not to say that people are not mistreated. Rather, it speaks situations in which people have become so enmeshed in the conflict that their sense of identity is linked to their role in the conflict. Back to the theme of Les Mis – without this conflict “who am I?”. In some cases, a resolution that would meet their needs would leave them without a sense of identity – without their “story”.

formative and narrative approaches to mediation address this aspect of conflict. Joseph Folger and Robert Busch, in The Promise of Mediation, suggest that “disputes can be viewed not as problems at all but as opportunities for moral growth and transformation”. Their transformative approach aims to “improve the parties themselves from what they were before (as opposing to simply improving their situation). Gerald Monk and John Winslade pioneered narrative mediation in their book of the same name. Their approach focuses on the importance of building a story of relationship between disputing parties that is incompatible with the conflict. Both these processes aim to provide participants with an answer to “who am I” by replacing their conflict saturated stories with ones of resolution – by giving the parties a new sense of who they are in relationship to the conflict.

One can only wonder what may have become of Javert, had he had access to Monk or Winslade (below). Sadly, such a scene would likely have been left on the cutting room floor, for “happily ever after” has no place in a tragedy.

About Gary Harper, The Joy of Conflict Resolution

Gary Harper is the principal of Harper and Associates. He is a trainer, writer and facilitator who specializes in conflict resolution. Through his unique blend of experience as a personal injury lawyer, general manager, insurance regulator and retail store owner, he learned the value of clear communication and conflict resolution skills. Since 1991 he has trained and mediated in a wide variety of organizations - from health care to the film industry to many levels of government. He is a member of the instructional team of the Centre for Conflict Resolution at the Justice Institute of B. C. and recently authored The Joy of Conflict Resolution: Transforming Victims, Villains and Heroes in the Workplace and at Home.
View all posts by Gary Harper, The Joy of Conflict Resolution →
This entry was posted in conflict resolution, mediation and tagged conflict resolution, drama triangle of conflict, Folger and Bush, identity in conflict, Javert suicide, Les Mis, Les Miserables, Monk and Winslade, narrative mediation. Bookmark the permalink.